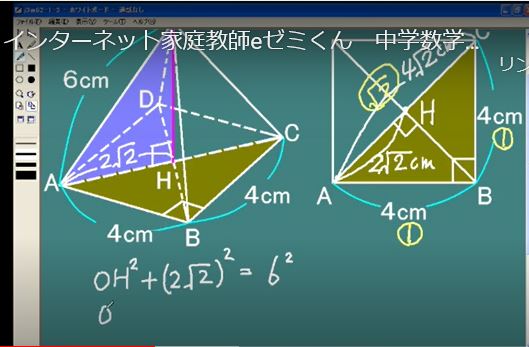 When it starts to rain, even a light sprinkling rain, people might feel sad or down because it’s dark outside and it affects our plans. “Spring rain” and “First winter rain”, written by Matsuo Basho about two centuries ago, are basically about rain in different seasons. Even though both poems focus on nature and rain, their themes have more to do with human egos and our inability to see things outside of our own frame of reference. Both poems force the reader to step away from his or her usual point of view to consider the world from a new perspective, and also these poems include humorous moods and specific words to lead the reader to imagine the view which he is easily led to see.

In “First winter rain,” the speaker forces the reader to alter his perspective and to view the rain not only from his own eyes but from the eyes of a monkey. When the reader starts reading this poem, he or she might first imagine a first winter rain. For example, on a cold winter day, people are walking on the street with umbrella when it starts to （消す。 cold winter ） rain, （消す。For exampleとかぶるため。 or something like that. ） However, when people look at the second line of the poem, the thing, people imagine before, will be changed by the word, monkey. People don’t usually see them in their lives except when visiting the zoo or climbing the mountain. That’s why people will think why the speaker mentioned about monkey and also they will change their own view of winter rain and imagine the monkey in the rain. In addition, the third line of this poem affects(消す to a ） people’s egotistic way of thinking as well. People will realize that the monkey also feels cold in winter rain and wants a raincoat like a human. Many people don’t really care about ( nature’s feeling →how animals feelに変更)every time because every （ people have →everyの後は単数のため、person hasにする）a personal feeling or a subjective judgment. For example, when people find a flying insect around them, they might kill it by their hands or spray without thinking animal’s feeling because people do not want it to sting. That’s ( the を消す） one of the reasons why the speaker put the monkey suddenly into this poem. The speaker want s the reader to think or focus on the view of nature’s side, ( and →thereforeにする)he （消す also ）use s the unusual things such as the monkey wanting a raincoat in order to make a humorous mood and lead people to consider the nature objectivity and easily.

In “Spring rain”, there are some similar points and style with “F irst winter rain” such as way of looking at nature and focusing on nature without selfish thinking. In the beginning of the poem, people will imagine spring rain based on their own experiences again. When people continue to read this poem, they might think that why speaker put the specific word, wasps’ nest, as same as monkey in the first winter rain. Some people will say this poem does not have nature’s feeling compared with “Fist winter rain”, but it does. Even though the wasps’ nest is not an animal, it has a feeling in a sense. （As following →Inに変更 )old Japanese, the season of spring in this poem is between January and March, so today’s spring is different from this poem. Assuming that this poem （wasを追加） written between January and March, wasps’ nest does not have wasps inside because it’s winter. That meansthe speaker wrote about empty wasps’ nest with the rain in this poem. When people imagine the empty nest, it seems to be lonely and sad because no one else is around it. Moreover, the dripping from the wasps’ nest looks like a tear, and also it means wasps’ nest were crying and feeling lonely at that time. The speaker showed people how the nest feels about without using direct words such as tear, and lonely. He gave a minute description of the view and wanted people to take a time to think this complicated portrayal and meaning to lead people to disregard their own selfish thinking of spring rain. In addition, as people know, the wasps make their nest in safety place where can avoid rain and wind. Since this poem ( said that →mentioned about)dripping from the wasps’ nest, it’s unusual situation for wasps. In addition, the second line of this poem reminds people （ about →of an) old house because if it was a new house, the rain would not leak from the roof. This part shows loneliness and silence as well. Thus the speaker used the unusual situation to make a humor and made characteristic scene description to describe feeling of nature in the indirectly way.
In conclusion, both poem s are related each other in terms of an effective expression of nature’s feeling and making poem intelligibly by using humorous mood. The speaker mostly points nature’s side to let people （消す to ） imagine and recognize nature’s perspective. Furthermore, he might have a same feeling show n in these poems such as sad ness , loneliness and cold ness, so he overlapped his feelings(消す identified )with nature’s feeling or used nature to make meaning easy as a projection. Therefore, either way, the speaker respects nature strongly and expands his imagination by looking at the details of nature. Not to forget that the nature is always around us and they also have feeling as people have, and looking something from various view points are important for him and us.
段落の構成
第一段落：introduction
Both of these two poems contain the word “rain” and depict scenes on a rainy day. However, there are both similarities and differences in terms of the perspectives and feelings expressed in them.
第二段落：similarity 1
As for the similarity, they both show our inability to see things outside of our own frame of reference. Both poems force the reader to step away from his or her usual point of view to consider the world from a new perspective,
以降、そう思った理由や例をのべる
第三段落：similarity 2
Secondly, both of these poems include humorous moods and specific words to lead the reader to imagine the view which he is easily led to see.
以降、理由や 例を述べる
(もしあれば次の段落以降もsimilarityを書く）
第四段落：difference 1
monkeyはいるが、waspはいない。waspがいないことで、余計ものさびしさを感じさせる。人にどんな情景かを想像させる。など。
（もしあれば次の段落以降もdifferenceを書く）
最後の段落：conclusionでまとめる
As mentioned above, I found that these poems have many things in common regarding A, B and C. However, they do have differences as well such as A, B and C.

The author suggests that eceryone who lives in a city should ride a bicycle to get to work. Write approximatery 70-100 words arguing against this suggestion. Give at least two reasons to support your argument.(You will not lose any points if you write more than 100 woeds.)

（C)Imagine that you have received the following email invitation from a close friend to attend a flash mob ivent: "Hi! Let's get together at Odori Park during the Sapporo Snow Festival this Friday at 6 pm and have a big snowball fight !" Dou you think this activity would be worth participating in? In 70-100 words , state your opinion and give THREE specific reasons to support your position.

People rescued in the mountains in Japan should pay the full cost of their rescue. Do you agree or disagree ? Explain why in 70-100 words giving two reasons to support your opinion. 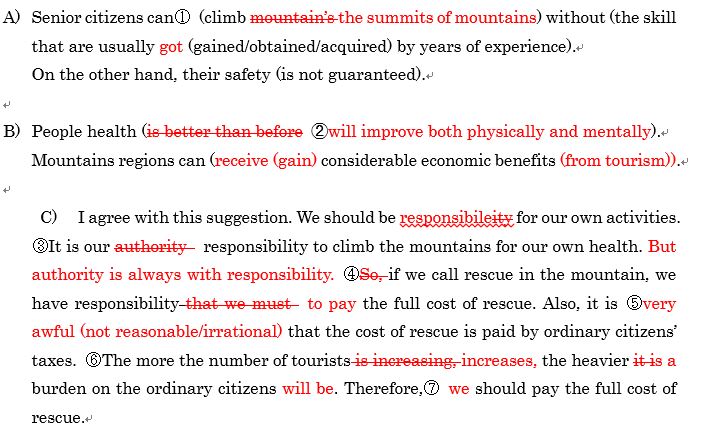 Noise is an unavoidable part of modern life and cannot be reduced. Dou you agree? State your opinion in 70 to 100 words. Include examples or reasons to support your opinion.

① 書き出し分かりやすいです。最初に主張をまとめて書き、そのあとで理由を説明したらいいと思います
➁こういったものは騒音の原因になると本文中で説明されているので、改めて書く必要はないでしょう。
③「発展途上国では、たくさんの建物やインフラ（鉄道や空港、道路など）を作る必要があり、その過程で騒音が生まれる」など具体的に騒音が生まれる理由について述べると内容が膨らみます。例えば、In particular, in many developing countries, the demands for the new buildings and infrastructures cause the severe noise pollution.
④繰り返しになっているので、省いても問題ありません。
⑤繰り返しになっているので、違う表現に変えたほうが良いと思います。途中に出てきていたWe should afford to enjoy the various noises.などにしてもよいと思いますが… 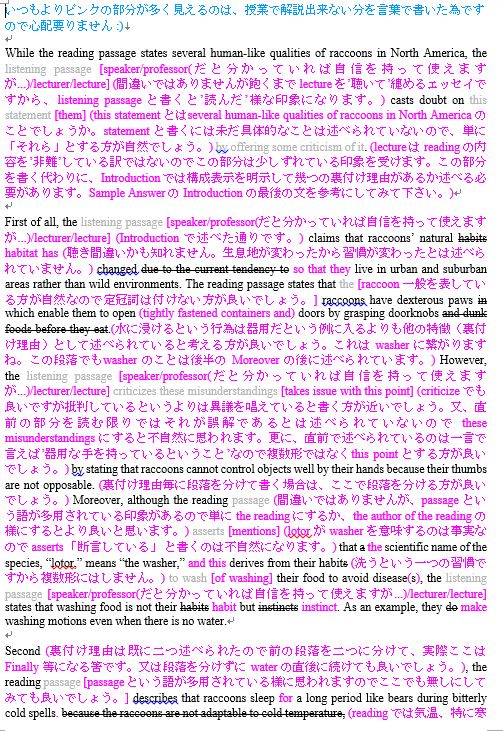 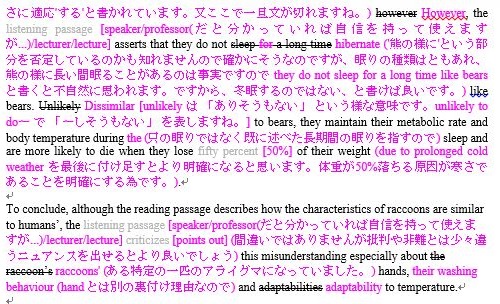